What To Do On Mackinac Island for Families 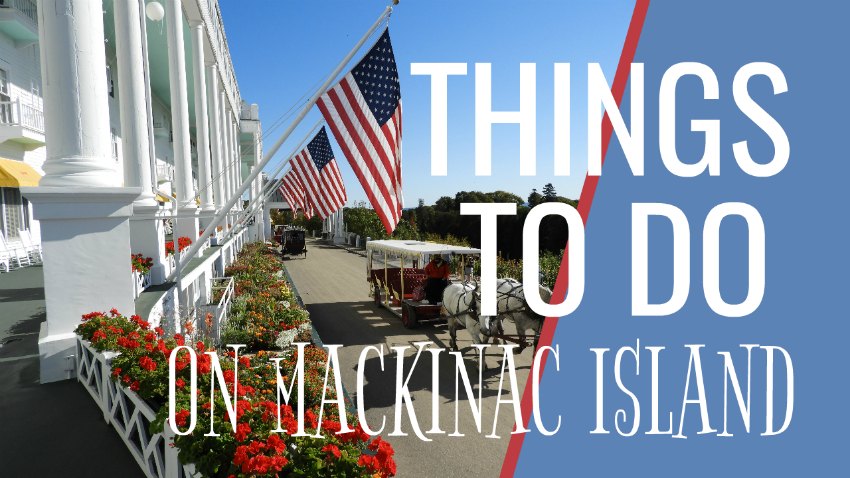 What to do on Mackinac Island

Are you wondering what to do on Mackinac Island other than eat fudge and take a horse drawn carriage ride?  We have tons of off the beaten path activities and hidden gems for you to discover!

This Page Is A Continuation...Click Below For Page 1

NOTE:  We had so many things to do on Mackinac Island (hey, we were a little excited...) that we had to create two pages.  CLICK HERE OR THE IMAGE ABOVE FOR THE FIRST PAGE.

We will be starting this page with "L" or Skull Cave. Are you excited? We will give you tons of ideas of what to do on Mackinac Island!

What To Do On Mackinac Island So Everyone Is Happy!

Mackinac Island Map, Things To Do 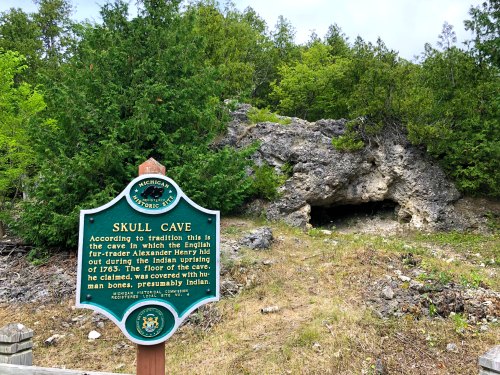 According to tradition, the fur trader, Alexander Henry, hid out in this cave during the Indian Uprising of 1763.  Per his account, the floor of the cave was covered with human bones, presumably, Indian bones.

This small and shallow cave in Mackinac Island State Park once served as a Native American burial site.  It's fun to look for faces on the rocks and take photos in the cave. 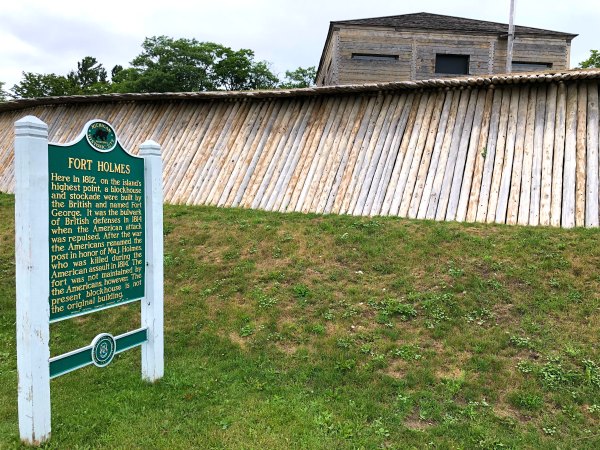 Fort Holmes, originally named Fort George after King George III of Britain, is a small fort located 890 feet above sea level. It is constructed of earth and wood. I love the breathtaking 360-degree sweeping views of the Island and its surrounding waters. It doesn’t take long to realize why the British used it as a lookout.

TIP: Use your iPhone on its panoramic setting to capture some stunning vistas! Visiting Fort Holmes also provides a unique view of the Mighty Mackinac Bridge.

You can then show your friends what to do on Mackinac Island other than fudge and carriage rides...not that there's anything wrong with that. 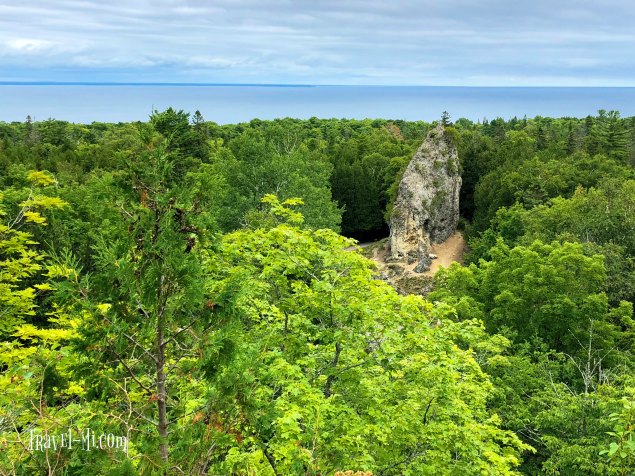 Sugarloaf Rock from Look Out Point

Sugar Loaf is a 75-foot-high landlocked rock or stack in the interior of Mackinac Island in Lake Huron.  If you wish to get up close and personal with the rock, you can descend these stairs (to the left of Lookout Point).  Honestly, we just stayed at the lookout as we had biked over 10 miles and was pretty exhausted by this point!! 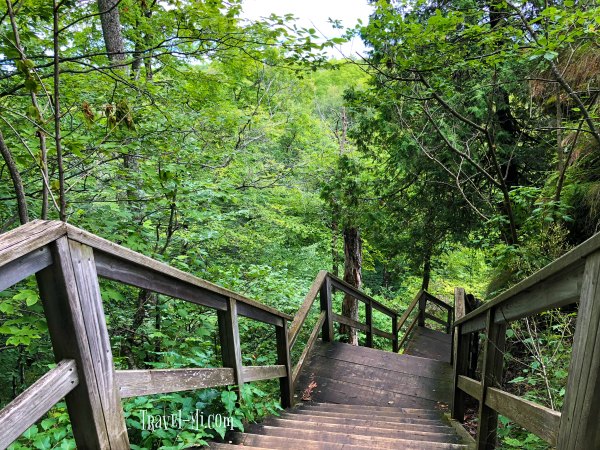 The true “hidden gem” aspect of Sugar Loaf Rock is the nearby Point Lookout. It’s one of the higher points on the Island and provides a stunning view of the rock, trees and miles of sparking blue water. The color contrast is unbelievable and you’ll find yourself mesmerized by the beauty.

If you are wondering what to do on Mackinac Island, Sugar Loaf Rock and Point Look Out should be on your list! 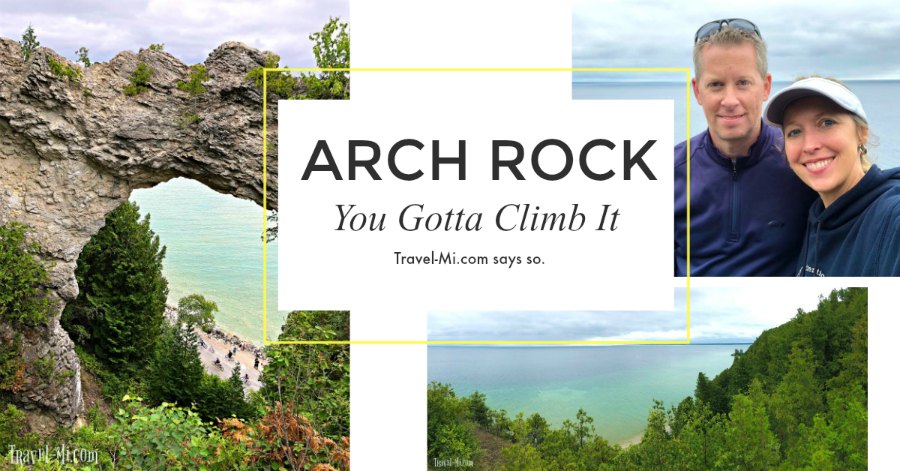 Arch Rock is a stunning natural rock formation with a fifty foot span at the widest point! Water and wind slowly dissolved the limestone rock leaving only the breccia rock in the form of an arch.

SO, there are 207 steps to the top.  You still gotta do it.  If there were 208 steps I'd say, "well, maybe you can sit this one out." But no.  The views at the top are AwEsOmE.  Yes. You can do it. There are landings along the way and great views so you can stop and rest.  Plus, if you are wondering what to do on Mackinac Island, this is THE THING. 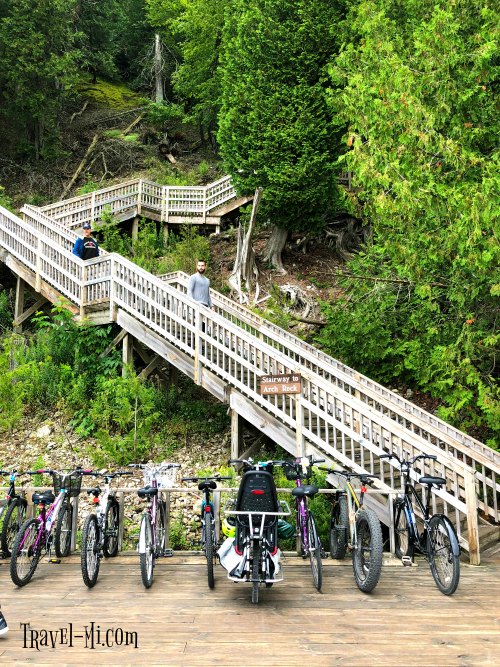 The Arch stands 146 feet above the water level and can be reached by taking the Arch Rock Bicycle Trail, Arch Rock Road or Lake Shore Road.  What an awesome natural formation.  Be sure to take the time to visit Arch Rock!!

Native Americans believe that the arch has many powers and they harbor several legends about it.  Come check it out for yourself!

The water tower was erected in honor of John Nicolet who in 1634 passed through the Straits of Mackinac in a birch-bark canoe and was the first white man to enter Michigan and the Old Northwest. 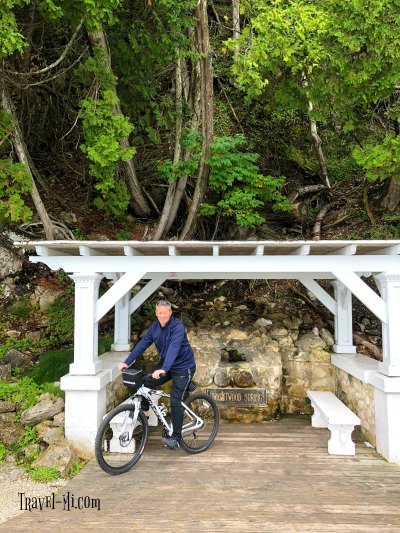 In 1909, Edwin Wood of Flint, MI, donated funds in memory of his son, Dwight Wood to make accessible and beautify the freshwater spring for the public.  The springs soon became a favorite resting spot for visitors as they sipped the cool water while resting in the shade.

The springs are just a few steps from the base of Arch Rock. The spring is very tiny but worth a few seconds stop. 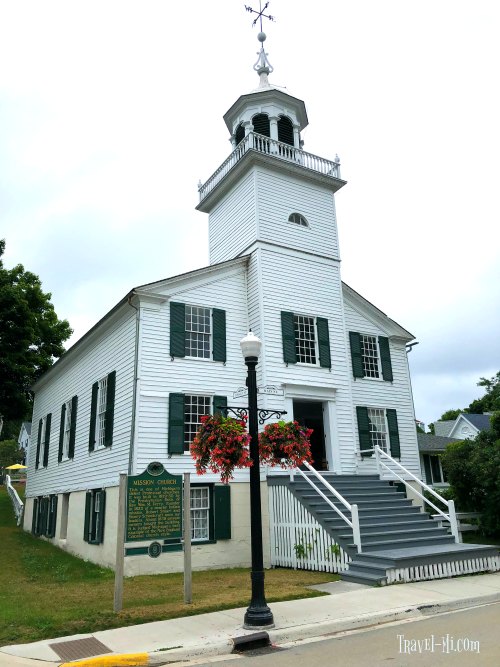 The Mission Church was a historic Congregational church located at the corner of Huron and Tuscott Streets on Mackinac Island, Michigan, United States.

Built in 1829, it is the oldest surviving church in the state of Michigan.

In 1971, the Mission Church was listed on the National Register of Historic Places.

St. Anne's Church is older but the original building was replaced with a new structure in 1874. 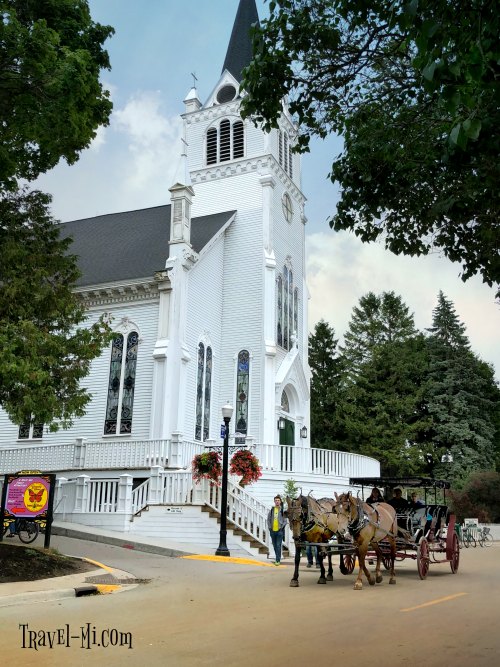 Sainte Anne's Church is a very beautiful Roman Catholic Church that was built in 1874 on the land donated by a former fur trader.

Ste. Anne's is the oldest Catholic Church in Michigan and is designated as a Michigan historic site.

The island had a historic French and Metis population before Anglo-American settlement. Its original building was replaced by a new structure in 1874, which was still used.

Sainte Anne's Church is also the first church dedicated to Sainte Anne, causing quite a controversy since Dominicans did not believe that Anne was holy.

Did You Know....The Original Mackinac Island Butterfly House is one of the oldest museums of its kind in the United States and the first in Michigan?

Their one-of-a-kind Insect World is a combination of fascinating, GIANT insects, both on display and live.  And don’t miss the turtle pond, where you can ‘search’ for Houdini.

Open until 6:00 p.m. during the popular summer months.  Cost is approximately $10 per adult and $5 for children.

Nobody should be complaining about what to do on Mackinac Island with the Island Butterfly House as one of your options!

The Richard and Jane Manoogian Mackinac Art Museum houses a diverse collection of art styles and expressions of Mackinac inspired art.  You can see hand-beaded clothes made by Native American garments, 17th and 18th century Great Lakes maps and rare  decorative pieces from the Victorian period.

I really liked the hand-tinted early-20th century photos by William H. Gardiner.  Be sure to check out the collections of Native American Art, historic maps and photos of the island.

**If you purchased tickets to the Fort, you can see this art museum free of charge.  Just show your fort ticket or bar code!

We hope you found lots of ideas of what to do on Mackinac Island!

More Things To Do On Mackinac Island

Here are more suggestions of what to do on Mackinac Island!

Did you know you can rent kayaks on Mackinac Island?  I mean, how cool is that?

There is so much more to The Island than fudge and horses!  If you are wondering what to do on Mackinac Island, try kayaking!!  You might love it!

Great Turtle Kayak Tours offers a wide variety of exciting kayaking tours to explore in the Mackinac Island area!  Try a beautiful sunrise or sunset tour.  Or enter the Straits outside the East breakwall towards Arch Rock and coast over the beautiful underwater caves and rock formations of the Rock Maze.

Lots of opportunities for taking awesome photos, snorkeling and making memories.  Discover all the options waiting for you here! 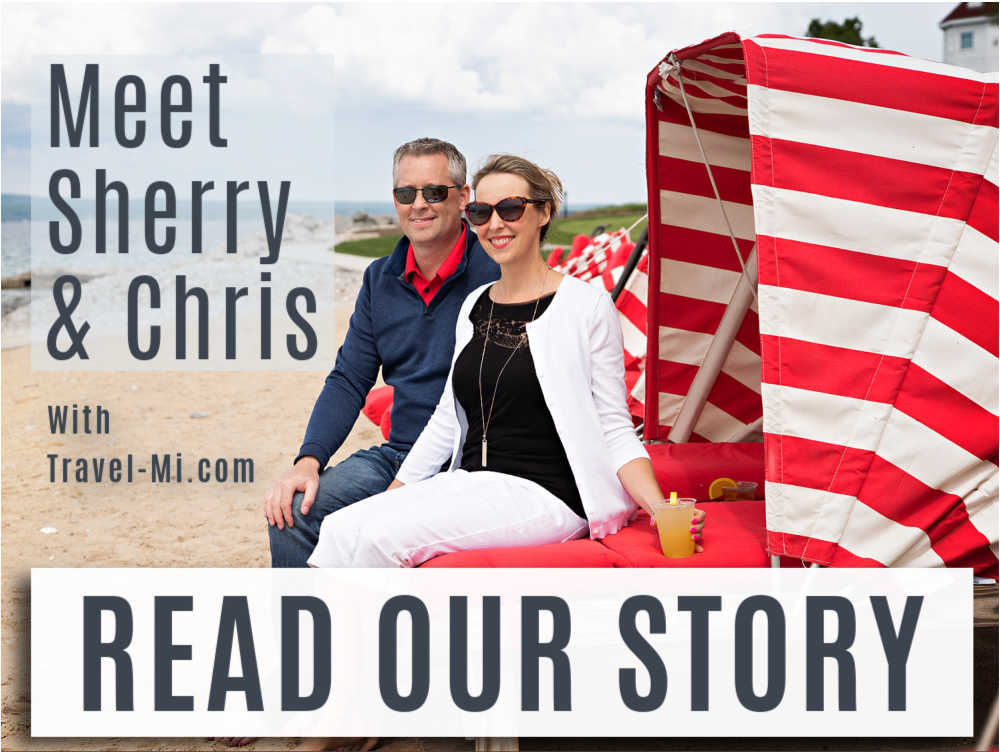 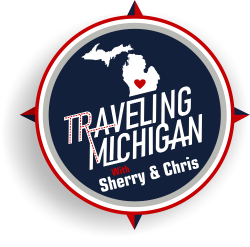